There are a number of ways to configure your workstations to use the Echo.Cloud.Filter DNS servers, the easiest being modifying your DHCP server settings.

The Dynamic Host Configuration Protocol (DHCP) automates the assignment of IP addresses, DNS Servers, default routers, and other IP parameters. The assignment usually occurs when the DHCP configured computer boots or regains connectivity to the network. The DHCP client sends out a broadcast message requesting a response from a DHCP server on the local network. The query is typically initiated immediately after booting and before the client initiates any IP based communication with other hosts. The DHCP server then replies to the client with its assigned IP address, DNS server and default gateway information.

When you order the Echo.Cloud.Filter, you will be emailed with the address of your custom management portal as well as the IP address of Pearl Software's DNS servers.

The following examples demonstrate how to modify DHCP in various environments.

EXAMPLE: Your DHCP Server is a Router or Access Point

If you are using a commercially available router for guest access (e.g. LinkSys or DLink), set the DNS servers in the Network Settings panel of the router setup page. The following demonstrates connecting to a Netgear router (consult your router's user manual for instructions specific to your router): 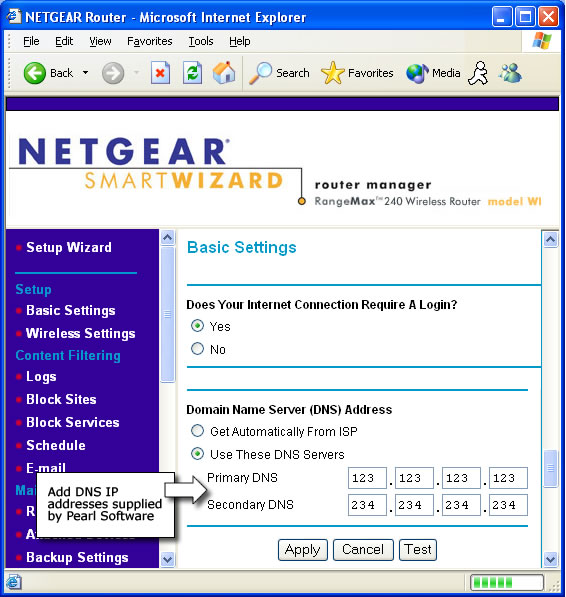 EXAMPLE: Your DHCP Server is a Windows Server

Modifying DHCP on a Windows Server 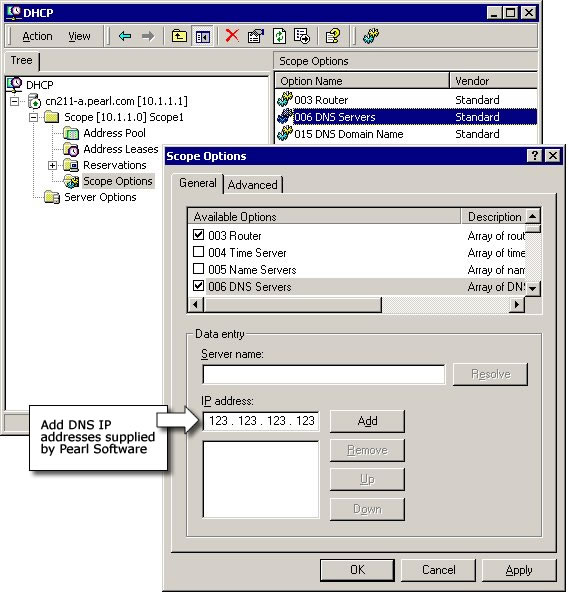 Note: If you would like to allow some users to have unfiltered Web access, you will want to create a separate DHCP Scope for those users.

Screen Tour ...to view how easy it is to configure Echo.Cloud.Filter.